First of all, THIS ISN’T A DIGITAL VS FILM ARTICLE ! I HATE THOSE!

I don’t intend to add onto an already oversized pile of toxic articles of meta physics articles of one being better than the other crapfest!

This is more of a article to document my reason selling off my digital camera. It wasn’t because of some great revelation or epiphany. Nor was it due to a discovery of something greater.

It was simply an economic scale of cost.

First let me explain a little about my photographic history, I started out using the Nikon D50, this was then followed by the S5 pro camera. All of these were high end cameras of the time which I used to great effort. It was like being on cloud 9.

Things were taken up a higher notch when I bought my D700 when it first released (at the time I had a fm2n and F4s for my film needs that gave me a chance to try out full frame). At that point it felt like the sky was the limit. I had so much joy using it that I was again soon looking to buy the next new release – Nikon D600.

But nothing stay up forever, not even the angels. At one point I was eyeing the D750 and was seriously contemplating splurging out for it. But then I realised something.

For every new DSLR I purchased – I would have to keep updating my workflow to adapt to the new camera, many days spent tuning it so it would work nicely with the new raw files, colour correction and even lens compatibility.

This became such a tedious task, I realised it wasn’t worth it anymore. It felt like I was working for the camera rather than it working for me. I wasn’t even earning any money from it. Like a blackhole it kept sucking, demanding more and more sacrificaes for each new “upgrade” and each time I would be forced to take a hit or at least just barely break even when I sold off the last one to fund the next one, promising myself that this would be the last one I ever need.

But it was a lie I would keep telling myself, I knew I wouldn’t stop.

Why did I take digital photography?
I took a long hard look at the path I had craved over the years and asked myself, “What was this about?”

It was about being creative, expressing or capturing something I saw for myself. Instead I had let myself be pulled into a vortex of gear buying. I was getting better gear, but I wasn’t getting any better art-wise.

No, that isn’t true. I was still improving but it was complicated. I had so many formats to learn and not fully embracing either becoming a jack of all trade but master of none. I wasn’t spending enough time on either because I wasn’t into photography full time since it was just an outlet of passion for me.

Because of the proliferation of newer camera gear, I was in a never-ending arms race against an enemy that didn’t exist. It felt like an addiction and that was when I realised it was an addiction.

I had to end the cycle once and for all by selling my D600. I barely got back anything for it. The value of DSLR drops so fast, it started drop even before you bought it! It made no sense to buy DSLR – low second hand value, disruptive changes to workflow forcing endless hours of adjustment just to get what I wanted.

If I was to go back again, or if anyone wants to try out digital photography, I would suggest they look into the second hand market. Good deals are abound – heaps of good quality gear at great bargain prices.

I had briefly tried to go all film during my month long Vietnam backpacking trip (2014), the risk was low (I yielded nothing in good photos. It was just an experience), but I was going to Japan and South Korea end of 2016. 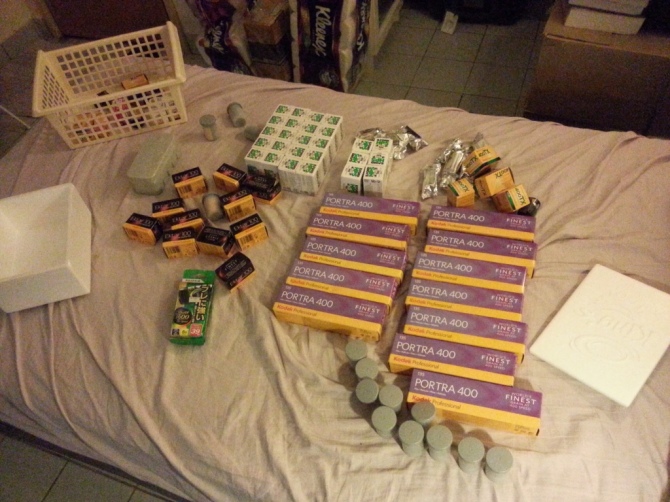 For my Vietnam trip, I had gone overboard with my film supply and shot only 40% of this. To make it worse I had brought too many types of film.

I didn’t even bother trying to sell it on the forums because I would have to deal with lots of bargain hunters and low ballers so unless you are buying to sell cameras, it isn’t worth it. I just wanted to sell it quickly and be done with it before I change my mind. Quickly went to one of the camera shops that would take it.

Once the deed was done, and stepping out of the shop with money in hand (money went into buying more film and improving other aspects of my upcoming trip).

Kept to a smaller load of film this time. Still trying to find my optimum amount based on my shooting style.

One less thing to worry about.

No more did I have to worry about internet connection for backing up my photos to smugmug account, nor had enough disk storage to keep the raw files. Granted of course I would have to worry about bringing enough film but that has always been an issue regardless I had a DSLR or not since I had been shooting dual format.

But now, I had only one format to worry about – film.

The main risk was now VERY apparent – loss of good shots, no way to be sure if I got it or not without preview.

While all of this seemed worrying but everything felt less cluttered. Like your room has less garbage.

Strange but that was how I felt, less noise and thing was calmer.

After 2 years
It has been almost 2 years since I gave up digital photography and took up film photography full time.

Do I regret it?

Sometimes when I want to quickly test out a setup in my studio but the moments are short. Generally I only focus on one set of questions now when doing photography, “Color or B&W?”

I now only have 4 types of film.

And ever since, I  have grown more confident of what kind of photos I will get shooting such a small subset. My mind has grown accustomed to not having a preview screen, now being able to see the shot in my mind and know what needs to be adjusted to get it instead of just shooting and checking the preview screen.

Most of all, I am happier now.

That is the most important thing.

I still sometimes miss the shots but that was the same even with digital so it doesn’t bother me. My art has become more tightly focused to what I want and not being catered to the gear I had.

Plus shooting film has allowed me to experiment and discover new effects or techniques. I also don’t feel the pressure of needing to quickly upload my results anymore, I upload those that I feel are indictive of my vision or skills.

Of course on this light bed is a roll of slide film but you get the idea.